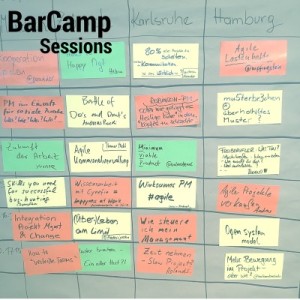 In episode 20 I have described the main differences between traditional conferences and the idea of BarCamps. In this session I wanted to give you my 15 tips that your first BarCamp visit becomes a success.

I have meanwhile joined several BarCamps. And I have made a lot of things wrong. Mainly because I was not aware of. Sometimes also I thought it is better done in another way. But there are a some main phases you are confronted with. And for all of them you can do things well and you do things much more better.

Starting into a BarCamp well prepared lets you enjoy the atmosphere even more intensively. You get much more quicker into connection with the other BarCamp-members. And you finally get more out of the time you’re staying at the event.

All BarCamps can be separated in three different phases: BEFORE, DURING and AFTER the BarCamp. Even the AFTER phase is as much important as the other phases. If you do not care for the AFTER-phase you loose a lot of momentum you have gained during your time before.

Please take these 15 tips into account. Let your first or next BarCamp become an even more thrilling success.

BEFORE the BarCamp it is much important to prepare yourself than in traditional conferences. In traditional conferences you more or less get surprised by the presenters and the program. On BarCamps the program will be designed and composed by all contributers. Therefore it is essential to get the idea and perhaps already the spirit of the BarCamp you’re willing to join. Even more, if you want to get the best out of it, a well preparedness is essential. Let’s start into it:

BEFORE the BarCamp it’s all about communication. Prepare yourself for communicating a lot. Not only verbally, but mainly also by Internet. The main intention is to get familiar with upcoming participants.

DURING the BarCamp could be considered the most important phase. However in my experience it is not. It might be of course the longest phase, but without your good preparation in the BEFORE-phase you might not get the full potential.

DURING the BarCamp it’s all about getting the most out of it. In what direction? That depends on you. But you should have an agenda, an intention, which you have prepared in your BEFORE-phase.

AFTER the BarCamp is different from regular traditional conferences. As your connection on the BarCamp was on eye-level and you’re already connected with other participants via Twitter, the BarCamp still continues for a while. It slowly goes down in the next two or three days. But everybody has the common days in mind and is eager to recapitulate or remember things.

In the AFTER the BarCamp phase it’s all about doing the aftermath, providing details, hardening your contacts and stay in touch with the participants.

Selected Links and Resources From This Episode

Thank You For Listening

Out of all the podcasts available in the Internet you tuned into mine, and I’m grateful for that. If you enjoyed the episode, please share it by using the social media buttons you see at the bottom of this note. Also, I would be very happy if you would consider taking the minute it takes to leave an honest review or rating for the podcast on iTunes or Stitcher. They’re extremely helpful when it comes to the ranking of the podcast. For sure I read every single one of them personally! Or, if you prefer a more direct contact, don't hesitate and drop me a note at feedback@embeddedsuccess.com
https://embeddedsuccess.com/wp-content/uploads/2015/06/Logo3.png 0 0 georg https://embeddedsuccess.com/wp-content/uploads/2015/06/Logo3.png georg2015-12-01 07:15:062016-10-23 14:03:1315 amazing tips for your first BarCamp visit – MES022
0 replies

Want to join the discussion?
Feel free to contribute!

This site uses Akismet to reduce spam. Learn how your comment data is processed.

How everything started – My way to the PDP-11 – MES021 Engineers’ Talk – DevOp and Tester Vassilis Rizopoulos – ...
Scroll to top